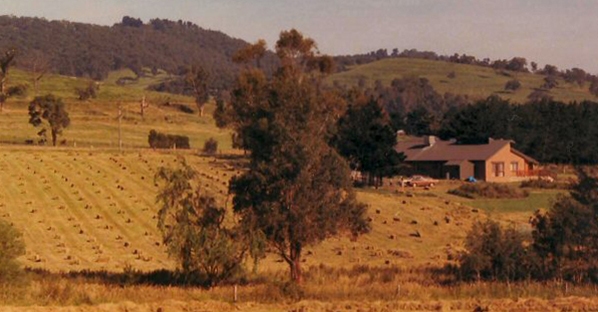 When I discover a wonderful new blog, I like to go right back to the beginnings and read along from there.  Within reason.  If I come across a blog that’s been going for ten years, it’s unlikely I’d do that, but anything around about three years old is fair game.  It gives me something to entertain myself with when waiting for stuff to happen at work or to fill in a lazy ten minutes or so at home.  This is exactly what happened when I found Country Life Experiment, written by Jo, who moved to a working farm in New South Wales with her Country Boy and three children a couple of years ago.  Jo writes beautifully of her country experiment and accompanies the words with delectable photos, which means I’m approaching the read-through much the way I would an addictive book: I really want to keep reading but I don’t want to get to the end.

Luckily, as it’s a blog, ‘the end’ merely means I’ll be up to date and waiting for the next blog post.

But I’m addicted for another reason: quite simply, it feels as though I’m reading about my childhood from my parents’ perspective and this is utterly fascinating.  Let me take you back to when I was little and I’ll explain…

When I was five, we moved to a ten acre farm on the outskirts of Yarra Glen.  Now, the size of those ten acres varies depending on who you talk to.  If you grew up in the suburbs, you probably think it’s huge; if you grew up in the country, you know it’s quite a small block.  To a five-year-old, however, it was enormous!  It looked a little like this:

That photo shows about half of the property.  The line where the hay bales end is the road and beyond that is another property that was eventually built upon.

My parents designed the house to take in every advantage of the sun and the rain and even included a solar hot water system – possibly the first in the area.  It took a little while to get going, especially on cold mornings, but it was pretty innovative at the time.

We mostly had sheep and hens, including one sheep that lived next to the house and kept the grass nice and short.  He looks enormous in the photo below but it’s only because I’m so tiny. 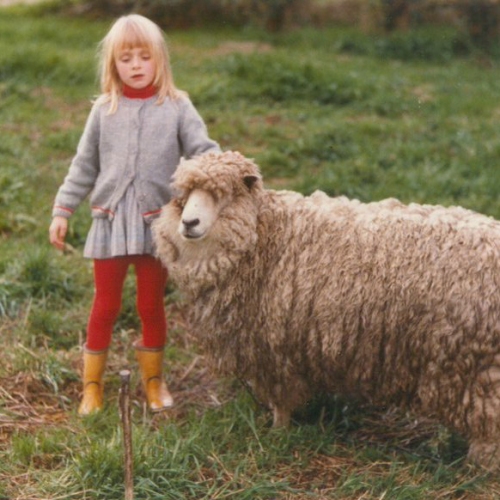 We used to try and ride him but he wasn’t really in to it.  He didn’t throw us off or anything; he just tended to ignore us and stand there cropping a single clump of grass for the forseeable future.  So it was more ‘sitting’ rather than ‘riding’ but it never stopped us trying.

As a kid, I didn’t appreciate what a momentous move it actually was for my parents.  They were going from a suburban life and a suburban upbringing to a ten acre plot that they had to manage themselves.  Imagine that!  My brother and I just went with the flow, obviously, given that we were five and two at the time.  An announcement that we were moving to the country was met with no more or less enthusiasm than an announcement that we were having ice cream for dessert.  It just happened because our parents willed it so.

Apparently, my standard paddock attire was skirt and stockings (with unseen gumboots – trust me on this).  This neatly aligns with my approach to dressing now, although without the gumboots.

We had a couple of steers at one point that I think we eventually ate, although I may be imagining this.  Our neighbours had cattle and I thought they looked like much more trouble than sheep.  I still think this, whether I’m right or wrong.  Plus, sheep have the odd tendency to jump over absolutely nothing because the sheep in front of them did it, which is kind of hilarious to watch.  And I did watch it a lot because I was brilliant at herding sheep.  It’s all about right angles. 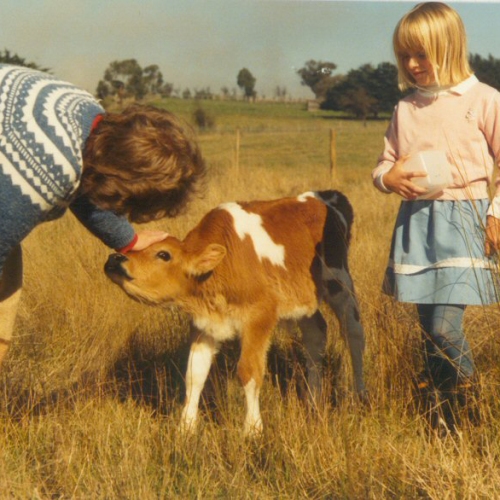 When I wasn’t running around outside, building bark huts against the trees or riding my bike up and down the driveway, I tended to do this:

Fire optional, depending on seasonal need, of course.  Eventually, we got a proper wood heater, but that Coonara did a pretty decent job of keeping the lounge room warm.  Everywhere else was icy cold in Winter, but the lounge was fine.

Look at that eighties style.  I still remember those sunglasses – they were amazing!  I felt so grown up when I wore them.

Behind me, you can see two items that featured in our play: a big pile of dirt and a tractor.  The big pile of dirt is that rather modest-looking green mound by my right arm.  It ended up being much bigger than that and it was so much fun to play on.  At one point, we made an elaborate little city of roads and pathways which was eventually worn away.  The tractor to my left ended its life in stationary form, but it used to be put to good use.  If we were lucky, we’d be allowed to stand on the carry-all (which looked a little like this) and be driven about the paddocks.  It was bumpy and uncomfortable and you had to hold on for dear life.  In other words: the best fun ever!

I always felt like a bit of an outsider at school – always the ‘new girl’, even though I’d been there since Grade 1 – but I’m glad I grew up on those ten acres in a great, wide valley.  Fresh air, fresh food, pets to love and look after, eggs to collect and mountains to adore – childhood doesn’t get any better than that.  Growing up, I never really thought about how my parents felt about this move they’d spear-headed and by reading Jo’s blog, I feel as though I’m finally having a glimpse into how it might have been for them.

Obviously, our situations are somewhat different.  Jo and her family live on a large, working farm far from town whereas ours was a ten acre farmlet within walking distance of town.  (Assuming you consider a half an hour walk one way to be ‘walking distance’, that is.)  But whenever Jo posts photos of whatever’s happening on the farm, I just think of the memories it will evoke for her kids when they’re grown up.  They may be photos of completely ordinary things, as with the ones I’ve shared here, but I’m sure it will take them right back to the moment as these ones do for me.

19 thoughts on “A Country Childhood”

Welcome to Katie Writes Stuff, a personal blog where I write stuff so you can read stuff - everyone wins! If you like old-fashioned fun, roadtrips, and living a simpler life, then you've come to the right place.

There was an error retrieving images from Instagram. An attempt will be remade in a few minutes.